Home/BOOKS/An incident on Simonka
1 of 4

An incident on Simonka 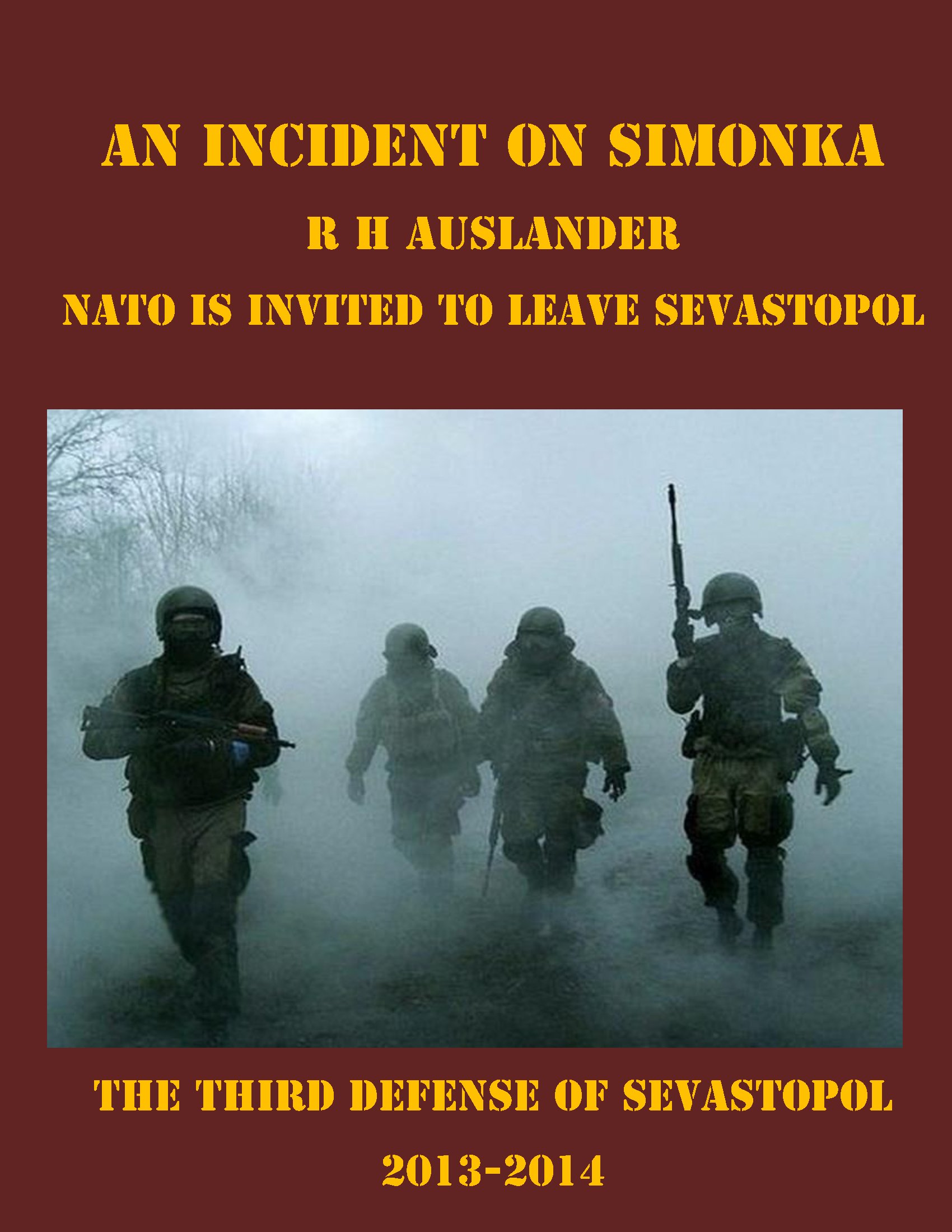 An Incident On Simonka 18+

R H Auslander has woven an interesting tale of Sevastopol in late February 2014. The author’s extensive knowledge of the tactics and protocol of both the Russian and NATO side of the event becomes clear as the story unfolds, as does his knowledge of Russian culture.

The fate in early March of the NATO forces stationed in Fiodosya on the south coast of Krimea is known, but what happened to the NATO enclave in Sevastopol in February? The US Marines in the enclave, located on Ulitsya Simonok in Rahdio Gorka Region on north side of the harbor, had been ordered at dawn on 23 February by the Sevastopol government to leave the city in two days, which they refused to do. They were gone from Sevastopol and Krimea by sunrise of 24 February.

In Soviet times, readers of the news were adept at reading the news and finding the nuggets of truth. That skill is useful when reading this tale. Is this story true? Only the author, and those who may or may not have been involved in an event that may or may not have happened, know for sure. However, as one commentator wrote, 'That Terek River fight must have been one heck of a battle for a bull Colonel and a First Shirt to get shot up.' And it was one heck of a fight.

Available from the author, Electronic edition via PDF file. Please email for purchase via contact email. Payment via paypal only except in Russia, where other payment methods are available. $6.95 R 507.35.

Normally stories this large have several more pages, indeed, more volumes. I don't know how Auslander packed so much story in this little book. Like real classic literature there is a depth in the seemingly mundane that belies its inherent genius. This book is a work of genius with its novelty, originality, and plot twists at many different levels simultaneously that it constantly finds you smiling. I've bought his other books on the hunch Auslander produces genius work consistently.
Anon 05/14/2019, 18:54
April 30, 2018.
I read Incident On Simonka from a copy sent to me by Auslander. I can’t put this review on amazon, we don’t have it here, but I give it top marks. Here is my take on this book.

This is not an ordinary book or story, neither is it told in an ordinary fashion. And it isn’t a book about ordinary circumstances either. The events described in the book have a close resemblance to actual events that did go down. For someone who was briefly associated with the events in Crimea, it fells like a stroll down memory lane. The book doesn’t unfold like a book but rather like an experience. I am very glad Auslander was kind enough to give me a copy to read.
Ed Walsh 05/14/2019, 18:53
April 29,2016
A Tantalizing Introduction to Auslander’s Second Book
An Incident at Simonka

What a pleasure to be back with these characters we first met in “Never the Last One”. That being a full length book, the characters had plenty of space to develop and many of them were indelibly drawn: very unique, unfailingly interesting, and some seemingly bigger than life. Readers who have not read the first book will still enjoy a good read, but will not have the back story on the characters. The characters who are new with this book are very real. The ones who are arrayed against the Russians are not depicted as evil or nasty, but rather as people who are on the opposing side. They are treated with a soldier’s respect for his opponents, who are simply following their orders, too. But they are each distinct personalities. I felt glad to meet them and hear what they had to say.

Well, for readers of the first book, our old friends are back, all summoned to respond to a crisis in their shared and beloved city of Sevastopol. This being a very short book, they each get less exposure, but all my favorites take part in the action.

And action we get into right away. With only a day’s notice they must plan, practice, and execute a very dangerous mission to save their home city, and maybe a big chunk of Russia, from falling into enemy hands.

The author is a skilled story teller with a sure hand in directing action scenes, and plotting a very plausible story. Very plausible and quite relevant. This reviewer believes that something along the lines of this story actually happened – or maybe almost happened.

The story line is well structured, with roughly a chapter each presenting (1) the assault and capture operation itself, (2) the careful business of returning captured soldiers to a US Navy ship standing offshore, (3) the after the event analysis on-board the Navy ship – which reveals to the reader many interesting things, and (4) various personal impacts, mainly centering on a young, pretty, and foolish Russian girl who was living with one of the coup plotters, and also managed to fall in love with a handsome young Russian naval officer. Action, romance, individual people participating in large scale historical events. You are not missing anything, except the rest of the book.
Johnny R. 05/14/2019, 18:51
September 25, 2017
Don’t read this book!
If you do, then you will find it necessary to read the full story, “Never the Last One” by the same author. When you start reading it, you can’t put it down, so it may have a serious impact on your life! Don’t say I didn’t warn you…

In my former life I had a German Government security clearance. I know
one or two things how US/NATO operates in Germany.

Nough said.
Babushka from Oz 05/13/2019, 19:22
Babushka in Oz
Skillful waeving of facts into fiction
April 30, 2016
Auslander has skilfully woven the facts of recent events in Crimea and Sevastopol (following the coup in Kiev) into a fast paced fiction. In Soviet times listeners of the news became very adept at reading between the lines and sifting out the hidden nuggets of truth. The same craft is required in reading Auslander’s short story. I was engaged and enthralled and with family living in Sevastopol, the story was particularly relevant. I look forward to more revealing ‘incidents’. I love the characters – they are ‘so Russian’.
John Neal Spangler 03/20/2019, 16:54
John Neal Spangler
Interesting "novel'
Good insight into Russian thinking , particularly the Russian military. Very good description of Crimea and some perhaps operation. Enjoyable read, if you like military affairs.

Whitly looked at the Lieutenant in astonishment. “You’ve got to be kidding me! You mean to tell me that bunch of Marine honchos got their butts waxed by some old, busted up and medically retired Spetznaz and a woman who is a civil engineer with no military service or experience? Get Chief Miller down here, he’s going to have a litter of kittens when he sees this. Good God! What the hell are we going to do when we meet the young Spetznaz?”